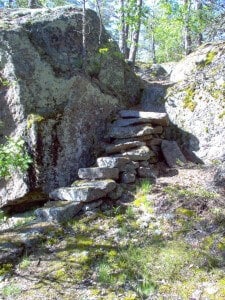 On the southern side of Museotie, in the village of Rakila, a short distance from the road Vitikkavuori is situated. It is worth visiting as from up there you can see far out to the sea. While climbing up there its possible to examine the ‘Smugglers lairs’.

On the south western side of the cliff you can find a large cave formed by large rocks and also stone steps. According to one story the smugglers used the cave as their hideout. Another less imaginative story is that visitors in the nearby Brakila manor house used to have picnics there during the summer and climbed up to admire the view and the steps were built for their comfort.

There are two ways to get to the top of the cliff, either through Pakholmantie or through Kalarannantie. If you use the western route and use Kalarannantie, you turn left to Kalarannankuja and walk about 200 meters. Before the sandy holes on the left side of the road there’s a car parking area covered by gravel.

When you continue upwards toward the top of the cliff you’ll get to the stone steps. You should not climb them straight away as you should first view the gorge between the two high cliffs. You can find it when you start walking left from the steps following the cliffside. After few meters you’ll find the entrance to the gorge. When you step in, its easy to believe the story about the smugglers!

After the steps you continue along the path upward to the left, until you get to the top and to the breathtaking view. Especially during the fall the view is magnificent when the trees between the cliffs and the sea shine in all the autumn colours as well as all the islands further away. 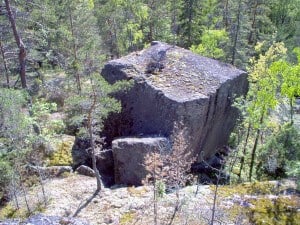