Out of the three villages Rakila is the westernmost. The first mentions of Brakila are found in the document acertaining the borders of Vehkalahti from the year 1458. Land records from 1551 mention three landlords of Brakila: Lasse Mikonpoika, Ambrosius Niilonpoika and Sigfrid Heikinpoika Braki. Two of the estates were laid desolate in the 1550’s but the one left over managed to equip a horseman from the year 1630 and so the estate was accepted as a dragoon estate. It was turned into a manor house after it passed on to a merchant of Hamina, Reinhold Böisman, and its plantations were looked after by 4 tenants. The widow of Böisman, Elisabet Röhling, sold the estate to Catherine von Toll in 1794.

At the beginning of the 18th century the rights to the estate were given to major-general Argun who had served in the Russian army. He also owned estates in Mäntlahti and the Myllykylä manor house. From him it passed on to cabinet minister Georg Fredrig von Döring during the 18th century. His was a cultured family from the Baltic countries. His son Aleksander inherited the manor. He was an engineer and a general and was among the builders building the war harbour in Kronstadt. From him the manor was passed on to cabinet minister Max von Döringen who was a private secretary and a treasurer to empress Aleksandra. 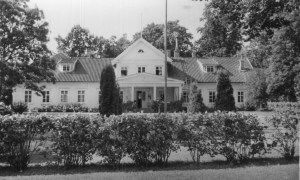 After Finland got its independence the von Döringens moved back to Germany after selling the manor of Brakila in 1919 to Lennart Baumgartner. His family still has the ownership of the estate.
The manors park like surroundings include several buildings from the 18th century and the beginning of 1900’s. The main building from the 17th century was destroyed by fire on the 9th of June 2008. Of the remaining buildings the partly white rendered cowshed built from clay and heather is from the year 1864. Its upper part and eaves are ornamented in ‘Swiss style’ as are many of the surrounding farm buildings from the 18th century.

The dairy was built in 1868. The workers quarters are from the early 19th century as well as the beach house built in the classical style.

To begin with the village of Rakila was a settlement sectioned from the Brakila manors grounds in the early 1940’s. Early 50’s the village was mainly inhabitet by immigrants from the shores of surrendered Karjala (Carelia?). Their properties numbered up to 18.