There are 4 tar trenches in the area which are still discernable.

During autumn 2004 we made four walking trips toward the tar trenches which were marked on our map. Would we find them? One was marked to be found in Rakila, three in Mäntlahti. There are no markings of the trenches on the islands, even though surely ships have been built and smiths have worked there. Propably whatever timber excisted on the islands would have ran out had they burned tar there.

Tar trenches provided tar during the summer, later in the autumn they provided coal to the furnaces of the local village smiths. Tar and coal were burned through to the early 1900’s until the industrial revolution made it unprofitable. Ships were built of metal and tar was replaced by chemicals. Maybe even the smiths got their furnace coal with less effort from the coal imported by ships? 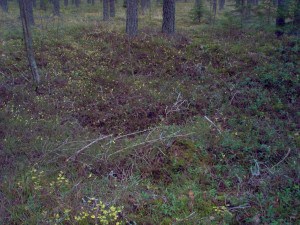 From the centre of Mäntlahti leading to Pyötsaari, the cape of Santanen is full of strange holes. While walking along the shorepath I wandered which of them might serve as remnants of a tar trench. One of the characteristics of a tar trench is that it is surrounded by an even circular embankment. In addition you may find a lower part just outside the trench where the tar had been run through a pipe. More or less right where it had been marked on the map, we found a decent spot for a tar trench, right by a steep slope leading to the shore. There are two holes side by side. The bigger one has the identification marks of a tar trench, the smaller one might have been created by an explosion (granade?) or it might have been a ‘fox hole’. 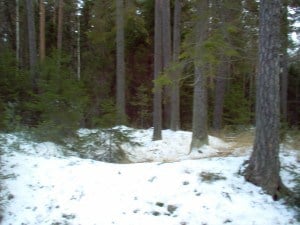 When the first snow had lightly covered the land we went on a search for the Suursuo tar trench, on the eastern shore of Mäntlahtis Kylänlahti. We assumed that the light cover of snow might improve the photography, as the Santanen trench did not prove to be so photogenic. We drove east along Museotie keeping our eyes on the bends and little roads. We had to get to the little passing Sutinvuori, along which you drive south a good kilometer. From the markings on the map we found a place where to start. This time we found the trench straight away, you could almost see it from the road. You could not mistake the shape of this terrain, it was clearly a tar trench. It even looked still in working order! Small trees were growing inside it, so maybe they had been makingctar here not so long ago..? Nice looking structure. 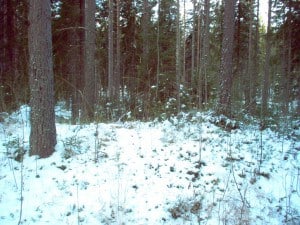 Excited by the Suursuo trench we left to find the tar trench in Rakila the next day. We drove from Lupinmäki along Vilniementie to the point where forest roads lead left to Rakinvuori and around it. We found our target without too much wandering from a good many meters north of the forest road.

The trench was well preserved but large trees were already growing inside it. Snow had already melted when we decided to find out the location of the last tartrench.

The north eastern trench is situated in the middle of a nameless area at least according to the map, but you can get quite close along the forest road. 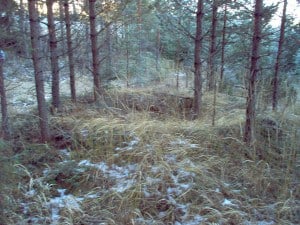 We drove about a kilometer east along Museotie from the Paussi kiosk and turned north to a cottage road. You could’nt get very far on the road but it was less than a kilometer to the trench on foot. This one was also well preserved. Judging by the trees it had been in use quite recently, as well as the Suursuo trench.